HAMS: Harm Reduction for Alcohol
Myths and Facts about Alcohol and Brain Damage 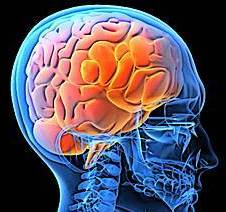 Although heavy drinking can cause a great deal of health damage ranging from cirrhosis of the liver to pancreatitis, horror stories of alcoholic brain damage are largely a myth. Although wet brain is real, it can be prevented by proper nutrition and is not directly caused by alcohol itself.

It has long been an established fact that actively drinking, alcohol dependent subjects have smaller brain volumes than normal control subjects who do not drink alcohol. Early researchers assumed that this was because alcohol killed the brain cells of alcohol dependent subjects, but current research proves that this hypothesis is largely untrue. Unless there has been brain damage as a result of liver failure or thiamine deficiency, the majority of brain cells of heavy drinkers are intact even though the brain has shrunk. We have also discovered that a long period of abstinence or moderate drinking tends to restore the volume of heavy drinker's brains back to normal.

The human brain consists of white cells and gray cells. The gray cells are responsible for thinking and feeling and decisions--they correspond to the Central Processing Unit (CPU) of your computer. The white cells are like the cables of your computer which connect the keyboard and the monitor to the CPU. In 1993 Jensen and Pakkenberg did brain cell counts which compared the number of cells in the brains of heavy drinkers with those of nondrinkers. What they found was that the number of gray cells was the same in both the heavy drinkers and the nondrinkers. However, there were fewer white brain cells in the brains of the drinkers which implies that alcohol kills white brain cells.

In 2009 George Fein discovered that there was one part of the brain in the parietal lobe--which is associated with spatial processing--where alcohol kills gray cells. Fein claims that this explains why even after alcohol dependent subjects regain use of all their other cognitive functions they still seem to have difficulties with spatial processing.

Studies by Pfefferbaum (1995, 1998) show that with long periods of abstinence or moderate drinking the brains of alcoholic dependent subjects return to nearly the same size as their nondrinking counterparts.

It is not conclusive whether shrinkage is more pronounced in males, in females, or the same in both (Hommer, 2003).

To summarize: The brains of long term, heavy drinkers shrink, but they return to almost full normal size after a long period of abstinence or moderate drinking. Long-term, heavy drinking kills some white brain cells and some of the gray cells responsible for spatial processing; however, it does not kill any other gray cells. In particular, the gray cells which are responsible for our thinking, decision making, and other cognitive processes remain intact even in long-term, heavy drinkers. Unless there is brain damage which is due to thiamine deficiency or liver failure nearly all brain functions of alcohol dependent drinkers can be returned to normal with a long period of abstinence or moderate drinking. Cognitive functioning tends to return to normal when brain size returns to normal.

There is some evidence that both the amount of brain shrinkage and the amount of cognitive deficit are dependent on the quantity of alcohol consumed and the number of years of heavy drinking; it is not established whether this relationship is linear or not.

The condition known as wet brain or Wernicke-Korsakoff Syndrome is a form of brain damage which is characterized by severe amnesia, confabulation, and sometimes dementia (Emsley, et al. 1996). It is not caused by direct effects of alcohol on the brain. It is caused by a severe deficiency of Thiamine (vitamin B1) and is often precipitated by a sudden influx of glucose. A number of things have been shown to lead to a severe enough thiamine deficiency to trigger wetbrain. These include a diet consisting solely of polished rice, prolonged bouts of morning sickness, bulimia and severe alcohol dependence.

The symptoms of Wernicke's encephalopathy are confusion, lack of coordination, and involuntary eye movements. If Wernicke's encephalopathy is immediately treated with thiamine it can be stopped and largely reversed. However, if Wernicke's encephalopathy is not immediately treated, it quickly turns into Korsakoff's psychosis, which is permanent and largely resistant to treatment. Symptoms of Korsakoff's syndrome include loss of past memories, inability to learn new things, confabulation (remembering things which never happened), lack of coordination and unsteady gait, and in severe cases dementia. In some cases physicians who should have known better have precipitated Wernicke-Korsakoff syndrome in patients by putting them on a glucose drip instead of a thiamine drip.

Alcohol tends to block absorption of thiamine by the human body, so all people who drink alcohol should be careful to eat well and should also take vitamin B1 pills to make sure that they are getting enough thiamine. Severely heavy drinkers who consume around a fifth or a quart of vodka per day are often too nauseous too nauseous to eat well and may tend to vomit up what they do eat. Moreover, if these people are living on the streets, they may be unwilling to spend money on food which could be used to buy alcohol. These people are in the greatest danger of developing Wernicke-Korsakoff syndrome.

Breedlove (2007) tells us that all cases of wetbrain due to alcohol ingestion could be prevented by regulations requiring that thiamine be added to alcoholic beverages. It is unfortunate that our puritanical US society prefers to send people to abstinence-based programs which fail rather than to eliminate much human suffering by implementing the simple harm reduction policy of adding thiamine to alcoholic beverages.

HAMS recommends that all drinkers be sure to eat nutritious meals and take vitamins--especially thiamine--to help ward off wetbrain. It is also good to try and have some abstinence days or otherwise reduce alcohol intake to help prevent this.

Hepatic encephalopathy is damage to the brain which is a result of liver failure, which may be caused by cirrhosis, hepatitis, etc. One job of the liver is to screen out toxins so that they can be disposed of as waste rather than circulate in the blood and damage delicate tissues like the brain. When the liver fails it is believed that toxins like ammonia and manganese cross the blood-brain barrier and cause damage to the brain--i. e. hepatic encephalopathy.

Symptoms of hepatic encephalopathy include lethargy, apathy, disorientation, inappropriate behavior, and slurred speech. In severe cases there may be coma.

If alcohol causes liver failure then hepatic encephalopathy can be one result.

People who drink massive quantities of alcohol suffer brain shrinkage and cognitive dysfunction as a result. However, the good news is that if these heavy drinkers do not have thiamine-related brain damage or liver-related brain damage then this cognitive dysfunction and brain shrinkage is almost entirely reversible with a change from heavy drinking to reduced drinking or alcohol abstinence.

Although most researchers emphasize alcohol abstinence, research from Sullivan et al (2000b) demonstrates that reduced drinking also restores cognitive function in formerly alcohol dependent drinkers: abstinence is not the only solution

The data in Table 1 is a conflation of information contained in two papers by George Fein about recovery of cognitive function after stopping heavy drinking. One paper is a literature review published in 1990 and the other is a study published in 2006. 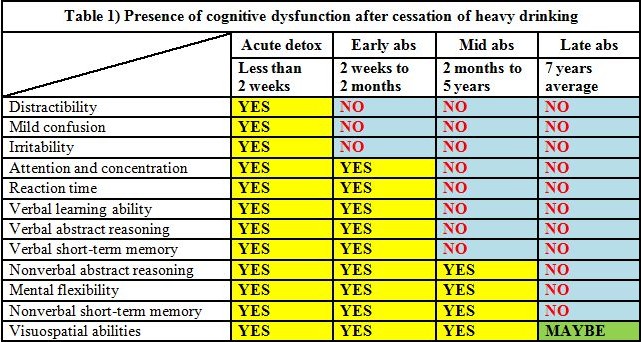 Although Fein's 1990 paper gives a spread of two months to five years for mid stage recovery of cognitive function, Fein's 2006 paper narrows this down and tells us that that these cognitive functions are generally recovered at the end of the first year after ceasing heavy drinking. Parsons (1998) states that remission of cognitive dysfunction occurs at 4 to 5 years.

According to Parsons 1998 there is no significant deference between alcohol dependent males and females on the variable of cognitive dysfunction.

Although the dose, the frequency, and the duration of alcohol consumption all appear to have an effect on the degree of cognitive dysfunction (as well as degree of incoordination) the relationship is not entirely clear cut. Parsons (1998) proposes a nonlinear, tripartite, threshold model of the effect of alcohol dose on cognitive dysfunction as exemplified in Table 2.

(Note: In their original paper Parson and Nixon used the old definition of a US standard drink--12g ETOH. This has been corrected to the current 14g definition here.)

In summary: Heavy drinkers who consume around a quart of booze or so every day suffer from cognitive defects and brain shrinkage. When these heavy drinkers quit drinking or reduce their consumption of alcohol to reasonable levels most of these cognitive dysfunction and much of this brain shrinkage goes away by the end of the first year. Virtually all of the cognitive dysfunction and brain shrinkage is gone at the at the end of five or so years except for some loss of white matter, a small loss of gray matter which controls spatial processing, and some minor dysfunction of spatial processing in some individuals. This is true for heavy drinkers who do not have thiamine related brain damage or brain damage related to liver failure which are permanent.

We should have learned long ago that scare tactics based on lies not only fail, but backfire and lead to worse problems than before. When kids found that "Reefer Madness" was a lie they stopped believing warnings about heroin, too. Since we know that drunkards like Hemingway, O'Neill, Faulkner and Steinbeck managed to win the Nobel Prize in Literature in spite of their drinking habits this puts a lie to the myth that every drinker turns into a brain damaged idiot. The time to put an end to the lies is now. Drinking a fifth of liquor a day is clearly not good for your health, but if you watch your nutrition and keep a handle on things then occasionally engaging in recreational intoxication is not nearly so bad as the fear-mongers would lead us to believe.

Lying to kids by telling them that a single night of heavy drinking will turn their brain into a walnut is irresponsible. Kids observe adults engaging in occasional recreational intoxications without suffering major brain damage and they know that they are being lied to. Once you lie to kids you lose your credibility for good because kids are real black and white thinkers. Once you have cried wolf then kids will not believe you when you warn them about real dangers like drinking and driving, the addictive nature of heroin, or the fact that drinking a fifth of liquor a day can rot your liver.

Let's stop all the scare tactics and tell kids the truth for a change--okay?

The life you save may be your child's.

Dlugos, CA and Pentney, RJ. (1997). Morphometric evidence that the total number of synapses on Purkinje neurons of old F344 rats is reduced after long-term ethanol treatment and restored to control levels after recovery. Alcohol and alcoholism (Oxford, Oxfordshire) 32 (2), 161-72

Harper, C and Kril, J. (1991). If you drink your brain will shrink. Neuropathological considerations. Alcohol and alcoholism. (Oxford, Oxfordshire). Supplement 1, 375-80

Harper, C and Kril, J. (1994). An introduction to alcohol-induced brain damage and its causes. Alcohol and alcoholism. (Oxford, Oxfordshire). Supplement 2, 237-43

Pfefferbaum, A et al. (1998). A controlled study of cortical gray matter and ventricular changes in alcoholic men over a 5-year interval. Archives of general psychiatry. 55 (10), 905-12

Sullivan, EV et al. (2002). Speed and efficiency but not accuracy or timing deficits of limb movements in alcoholic men and women. Alcoholism, clinical and experimental research. 26 (5), 705-13